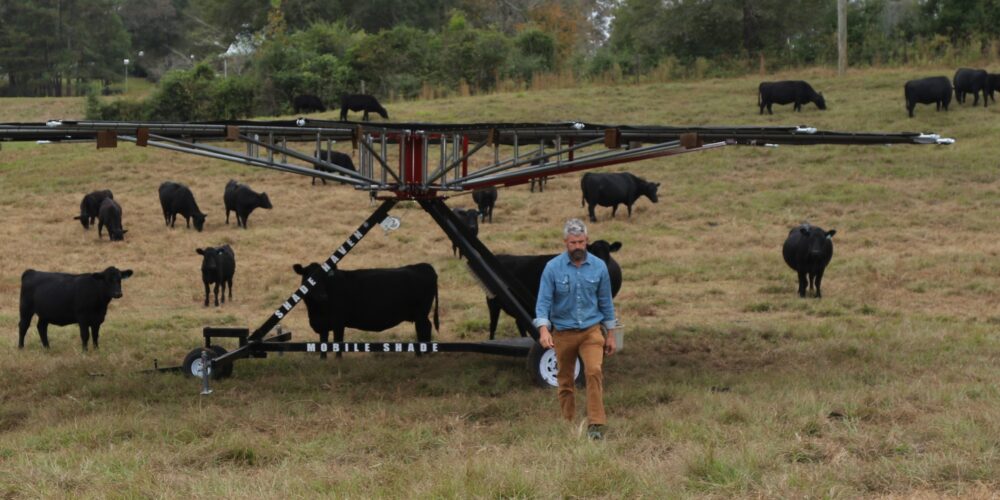 When Marine Corps Lt. Colonel Jason Smith retired from the military and took over his 130+ year-old family farm, he made a major lifestyle change. He also significantly changed the way the farm operated. This fifth-generation rancher in Mt. Hermon, Louisiana, implemented regenerative grazing practices that enrich the soil and ensure he can leave the farm in better shape for the next generation.

After 22 years in the Marine Corps, Smith and his wife Rebekah were ready to leave the nomadic military lifestyle behind to give their five children a place to identify as home. Returning to their roots in southern Louisiana, the couple made that home at Smith Angus Farm, part of the Walter L. Smith Farm, a farm with a long, rich history.

Recognized as a centennial farm by the Louisiana Department of Agriculture, the Walter L. Smith Farm received a land grant in 1892. That grant was used by Jason Smith’s Great, Great, Grandfather Walter Lorrain Smith and his wife Emma to clear longleaf pine and make a living off the land. “The original farm has actually been in my family even before 1892,” notes Smith.

According to Smith family lore, Smith’s ancestors first stepped foot on the land before it was part of the United States. The Spanish, who owned it at that time, chased off the people settling there. When the British took possession of the land, many of those people returned, including Smith’s ancestors. Ultimately the region was annexed by the United States, and Walter L. Smith officially laid claim to the land after receiving the land grant in 1892.

Functioning primarily as a dairy from the 1930s through the 1960s, the farm gradually transitioned to beef. Today Jason continues to run beef on the land – this time with a managed grazing approach.

Before he transitioned from officer to rancher, Smith needed to make sure the farm would be a viable business to support his family. “I thought – if you buy everything retail and sell everything wholesale, eventually you will be out of business, which is how most small family farms seem to be going,” says Smith.

After extensive research, he concluded a managed grazing system would enable him to be a good steward of the land, cut input costs and produce a healthy grass-fed product he could sell.

In 2017, he went to work removing the fixed, barbed-wire fencing and setting up paddocks. Since not all paddocks had available shade, he needed a way to protect his cattle from the punishing Louisiana sun. “It was September. I was doing some fencing and it was about 1000 degrees outside,” he recalls. “I was miserable, and I’m not a black cow. I thought ‘I’ve got to do something’, so I made the call to Shade Haven.” 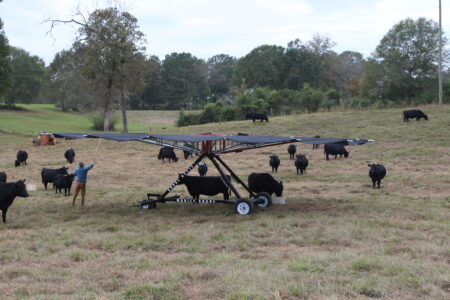 Smith purchased two SH1200 mobile shade systems in 2018. He purchased a third in 2021 and a fourth in October 2022. Prior to the first purchase, he considered having a mobile shade structure built by a local manufacturer. “The price he quoted me wasn’t that much cheaper than the fully developed Shade Haven product…I liked the idea of buying a product that is already made, that already has a track record of success.”

Smith moves his four Shade Havens along with 140 Angus beef through paddocks on his 240-acre farm. With frequent storms and strong winds in southern Louisiana, he appreciates the ease of retracting and opening the mobile shade structures. “I need something I can move every day, and something that is resilient to both the animals and the weather. That’s what sold me on the Shade Haven.”

The Shade Havens allow Smith to control nutrient distribution on his pasture, something important to his regenerative plan. “I want to use the manure as an asset not a liability. To do that, we have to put the cows in the middle of the pasture where there are no trees,” he adds. “If you have black cows in Louisiana anywhere from May to Oct without shade, you will end up with a lot of dead animals during a heatwave. I have to have shade.”

Smith convinced his NRCS office to expand its cost-share program to include a Shade Haven – which is significantly more mobile than the structure they already funded. He used NRCS funds toward the purchase of his first two Shade Havens in 2018, making him the first in Louisiana to own a Shade Haven. That’s something he is happy to proclaim. “I’m a sucker for something that is well-designed and functional, and if the Shade Haven is anything, it’s well-designed and functional.”

Jason Smith’s father ran Smith Angus Farm while living in Baton Rouge and working full-time for the Louisiana state police. Commuting back to the farm when he could, he handled the livestock in a way that fit his situation. “In those nine years, he adopted practices that allowed the cows to be without him for three or four days at a time,” explains Smith, noting the negative impact the continuous grazing practice left on the land.

As a full-time rancher, Smith has the time his father did not have to graze in a way that sustains his beef on grass year-round. “I’ve been pleased with the results of it all. Most people don’t get excited about watching grass grow, but I get pretty excited about that.”

Since 2019 Smith Angus has sold its grass-fed beef direct to customers and restaurants. “That was probably the biggest change we made. I wanted a value-added product,” says Smith. “I went through the process of getting a USDA approved label and found a USDA processor in Mississippi.”

“When people come out to our farm, they see it is a farm. It’s what people envision when they eat a steak. They don’t envision a feedlot, they envision an animal on grass, eating what nature intended.”

The restorative power grazing has on the soil is reciprocated by healing the soul and psyche of those who work the land. As a veteran of two tours in Iraq and recipient of a Silver Star for action in Fallujah, Smith knows first-hand the toll of war and the therapeutic value of a hard day’s work on the farm. 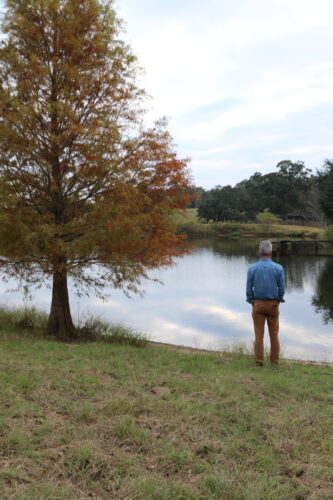 Smith sees the value he adds every time he moves his cattle to a new paddock. He knows his efforts are impacting the health of the soil when he sees birds flocking around his pasture in December. And he’s adding value to the farm’s bottom line and to the lives of his customers by producing and selling a healthy product.

On the farm’s website, he invites veterans to come to the farm. He wants fellow Marines and other military vets suffering from physical injuries or PTST to experience that kind of healing, to see the impact of their hard work and avoid the path of self-medication or suicide. Though nobody has taken him up on his offer yet, Smith notes, “The offer is still there.”

The Shade Haven team thanks Jason Smith for his service. We’re proud to be part of the grazing plan at this centennial farm and wish the Smiths success for many more generations.