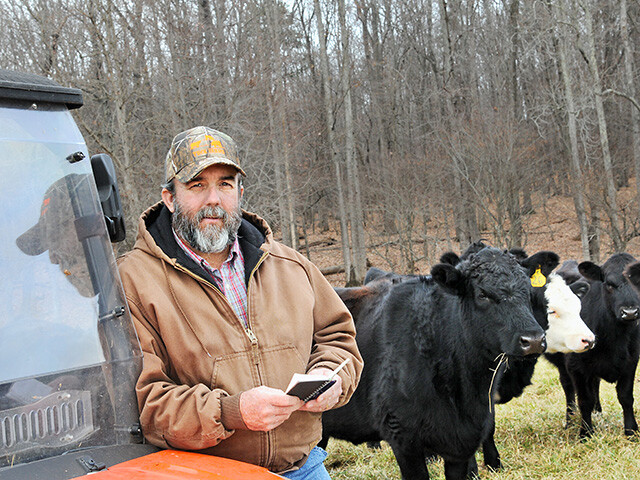 If you want proof Keith Tuck’s rotational-grazing system works, take a look at his hay equipment. Oh, wait. It’s gone. He sold it in 2016.

“It was a hard decision to make,” the Moneta, Virginia, cattleman admits. “My hay equipment sat there for two years before I took the plunge. But, it is a whole lot easier and less stressful.”

Tuck’s 75 to 80 cows and 30 replacement and first-calf heifers still need hay, even with his rotational-grazing system. But, he gets by with around 60 days of feeding hay compared to the 120 days he averaged before putting a rotational system into use on the family farm.

Now, all 250 acres of his fescue-clover pastures are grazed rather than part of it being set aside for making hay. He spends approximately $14,000 less on fertilizer for pasture- and hay land, and not just because he quit making hay.

“Rotational grazing works great to build up the soil,” Tuck says. “I read about a study that says it takes 27 years to cover your pastures with manure with conventional grazing. It only takes three to four years to get manure on every square foot of pasture with rotational grazing.”

He still soil-tests every two years but now sets the fertilizer spreader down to the lowest level possible, putting out 50 units of nitrogen an acre. He says this is enough to give fescue a boost and create stockpiled forage (standing hay) for late fall and winter. Potassium and phosphorus needs are maintained naturally with the cow herd and the hay they buy and feed.

Tuck had been eyeing a rotational-grazing system for years. Lack of a handy water source kept him from trying it.

“The pond was my only water source, and it was 2,000 feet away from part of the pasture.”

He sat down with his county’s Natural Resource and Conservation Service (NRCS) and Peaks of Otter Soil and Water Conservation District employees. They mapped out a system for him, and NRCS provided 75% cost-share money through the Conservation Reserve Enhancement Program and Environmental Quality Incentive Program. Contractors moved in around Labor Day 2010, installed fences and water systems, fenced out his pond and creek, and planted trees in the riparian areas. The work was finished by Thanksgiving.

Tuck says fencing cattle out of the creek and pond was a major component of the new system.

“All this water runs into Smith Mountain Lake when it leaves this farm. It is in the lake in a half a mile,” he says. The 32-square-mile lake is a major tourist draw for the area and has sparked quite a bit of development.

Today, Tuck’s 70-acre pastures are divided into permanent paddocks of 15 to 20 acres each. He further divides these with temporary electric fences. Each of his eight water troughs are in a corner so they can be central to four paddocks. 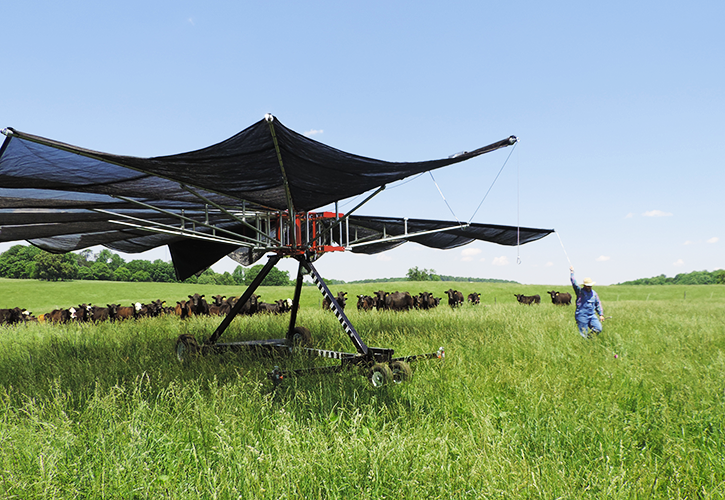 Tuck deploys one of two Shade Havens purchased in 2017

In the summer, Tuck rotates cattle from paddock to paddock, usually after a week.

“We never graze below 3 to 4 inches; we don’t want to stress the root systems,” he explains. Each paddock gets six to eight weeks of rest before he allows cattle to graze it again. “I like for it to be 18 inches tall when they come back around, enough for them to graze for a few days.”

John Andrae, Clemson University forage agronomist, says Tuck has the right idea. “Rest periods allow plants to produce new leaves, which collect energy, transform it into sugars and store these sugars so more leaves can be produced following the next grazing cycle. Not only is regrowth potential improved, but root depth and stand life are improved, as well.”

For winter grazing, Tuck goes to a stockpile system. He starts in August by taking the paddocks he wants to stockpile out of the rotation and applying nitrogen. With adequate rain, he generally has enough of a stockpile to graze by November.

He relies on strip grazing to get the most out of that stockpiled fescue. “I start at the water source and give them enough forage for three or four days, seven days at the most.”

When Tuck takes down the temporary fence and moves it, he doesn’t put up a back-fence but leaves it open so they can go back to the water trough. “There is no regrowth then, so it doesn’t hurt it,” he explains.

He keeps a rope hooked to his Kubota tractor and makes quick work of hitching it to the mineral feeder to pull it to fresh forage. “In 30 minutes, I can give them enough grazing to last for a week. It takes two hours to feed hay every day, plus you’re burning fuel. It is a whole lot more efficient and less expensive to stockpile hay.”

A meticulous recordkeeper, Tuck figured out how much time he spends a year now moving cattle and fence. He calculates he is making close to $50 an hour under the current system.

When he does feed hay, he tries to position it where pastures need the most help.

“I try to take mental notes during the growing season of where we need nutrients and seed,” he says. He also makes a point to unroll the hay, as this helps spread the nutrients and allows all the cows to get an equal chance to eat.

While labor and hay savings are impressive, Tuck emphasizes stockpiling isn’t a last-minute decision. “You have to plan well ahead. In the spring, plan for fall. And, take into account the cows have to be somewhere during stockpiling.

“The key to the whole thing is management. You have to be a good planner and think months down the road. You’ll put in as much desk time as you do in the field.”