Mike and Bridget Klein heal the land with cattle

Since moving to their 40-acre farm in Eden Valley, Minnesota in 2006, Mike and Bridget Klein have been rotational grazing to build organic matter in the soil and heal the land, damaged from many years of row cropping. In August 2021, they further increased their soil-healing efforts with the purchase of a Shade Haven mobile shade system.

“When we first bought our farm, the land was rented out for corn, beans, corn, beans – so the organic matter was down quite a bit,” explains Mike Klein. “In the pastures, the middle part [where there is no natural shade] is the part that isn’t going to refurbish as fast, so we put the Shade Haven there and get the nutrients exactly where they should be.”

The Kleins move their 100% grass-fed American Aberdeen beef cattle through multiple .7-acre paddocks every 24 hours. Mike frequently moves the cattle along with the Shade Haven multiple times daily within that paddock. “Because we use polywire and leave the four-wheeler in the pasture, we can just hook up and move the Shade Haven ahead another 100 feet, so we spread the fertility around.”

Managed grazing is not a new concept to this couple, who both grew up on Minnesota farms that practiced rotational grazing. Mike recalls some neighbors’ reactions to their managed grazing strategy. “They would comment that we were not using the grass up; we were wasting it. But on those summer days when our pastures were green and their pastures were brown, we knew we were doing the right thing.”

The Kleins usually have 30 head of cattle on the ground, including cow/calf pairs and heifers. Four-strand high-tensile fence lines the perimeter, and paddocks are fenced with 14-guage or polywire. 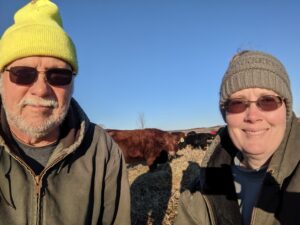 “We’ve moved progressively toward more and more polywire, because of the flexibility of it and recognizing that maintaining lanes is something we need,” notes Bridget. Because they breed their cows through artificial insemination, the lanes allow them to easily move the cows to be bred when the time is right. “We let them naturally come into heat,” she adds.

The record heat and drought conditions in summer 2021 forced the Klein’s to slow down their grazing rotation. “Our pasture wasn’t able to keep up; longer rest periods were needed for the sake of the grass,” noted Bridget. “We didn’t want to set back everything in the soil health and plant system, so we did feed supplemental hay.”

Concerned about cattle health in the extreme heat, the Kleins were forced to bale graze their cattle only where they had access to natural shade. That changed when they purchased a SH600 mobile shade structure in August 2021.

“I was really excited to get the Shade Haven in the paddock,” Bridget recalls. “We were able to move the bale grazing away from the trees. We could keep them grazing, keep them rotating… keep that fertility depositing, moving around. Honestly, our pastures in 2022 where we applied that management practice in 2021 look really good. It’s exciting to see that!”

Life on the farm

When she’s not wrangling cattle, Bridget works as a nurse. Now retired, Mike spends his day tending to the beef and to 4,000 to 5,000 hardneck garlic plants, which he harvests and sells along with the farm’s grassfed beef products.

The Kleins market their products through their Facebook page, MicBri Acres LLC, and through an email list that goes out to existing and new customers when beef and/or garlic is ready to sell. They typically offer past customers first dibs at quarter, half, and whole beef portions prior to processing. Additionally, they sell 20 lb. packs of ground beef.

As the saying goes, “You can take the girl off the farm, but you can’t take the farm out of the girl,” and Bridget Klein is no exception. Mike recalls that acquiring land and cattle was part of the deal when the couple got married. Now neither one can imagine life any other way.

“It’s great to have the cattle around,” says Bridget. “It’s great to be on the land and to see the improvements we’ve been able to accomplish, to help heal the soil with the animals.”