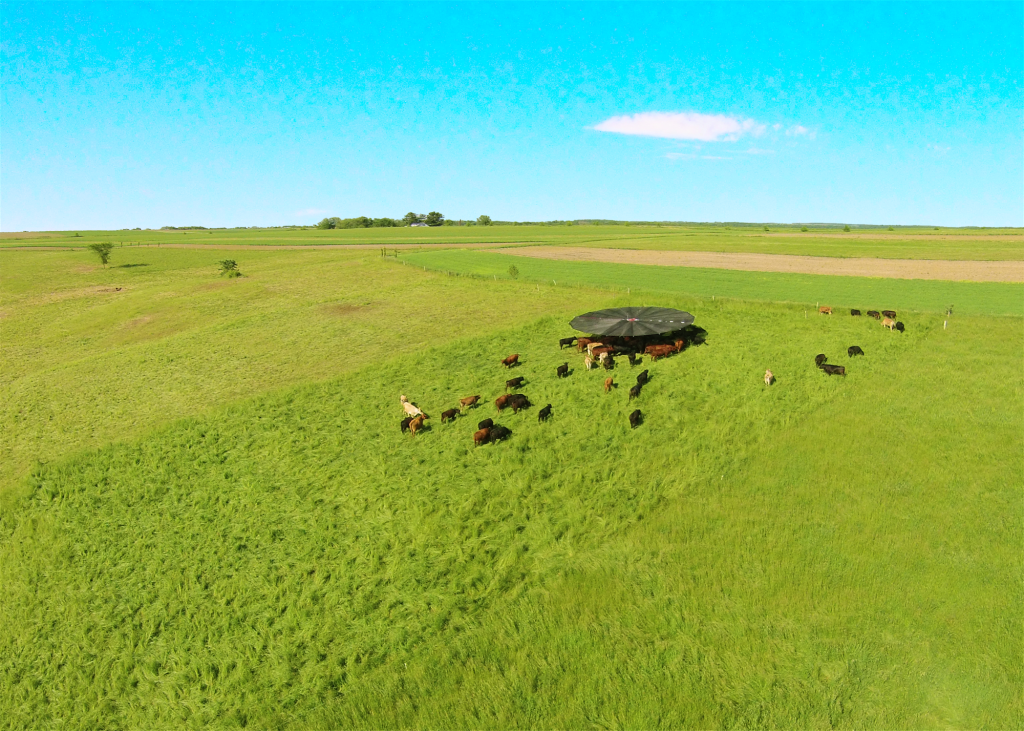 Earlier this year, the Agriculture Secretary of the U.S. Department of Agriculture (USDA) announced $150 million in funding would be available to agricultural producers through the Conservation Stewardship Program.

“The Conservation Stewardship Program is one of our most popular programs with producers because it results in real change on the ground by boosting soil and air quality, conserving clean water and enhancing wildlife habitat,” Tom Vilsack said.

There are differences in methodology and infrastructural design on any farm implementing rotational grazing, but the shared trait is the rotation of cattle through a subdivided pasture. Subdividing pasture into paddocks forces cattle to graze more evenly, increases pasture rest periods, and prohibits habitual congregation around resources. Through rotational grazing, a farmer can maximize the health and productivity of two commodities: pasture and herd.

The three basic management tools are fencing, water, and shade. The use of the first two has been well documented, but the effect of shade access cannot be understated as an essential element of rotational grazing best practices. As more farmers and ranchers look to reap the benefits of rotational grazing, portable shade may be the tool that ensures return on investment.

Nick Wallace has been on the forefront of the grass-fed beef movement. He says rotational grazing has been an essential part of his operation.

Wallace’s family has been farming in Keystone, Iowa since 1894. His 160-acre farm raises grass-fed beef about 30 miles west of Cedar Rapids. Wallace Farms products — including his famous Nick’s Sticks, a staple of the Seattle Seahawks diet — are the result of his “back to the land” pursuit of better health for his family, his cattle, and his customers.

Wallace was diagnosed with cancer when he was 19. His dad, Steve Wallace, spent significant amounts of time researching potential causes and concluded his son’s poor health was the result of consuming low-quality food. What began as an effort to grow their own food quickly evolved into a family business.

“When we started, we were one of the few grass-fed beef companies really pushing it,” Nick said. “Now, flash forward 12 years, everybody knows. They look for the grass-fed beef logo on snack sticks. It’s very mainstream.”

“With checkers, you know what the game is,” he said. “With chess, we come out every day, it is a chess-match; every day is different.”

There is no one-size-fits-all approach to raising cattle. Wallace’s “chess-match” approach to farming gives him the flexibility to optimize productivity and mitigate a wide range of weather conditions, pasture growth rates, and cattle behavior.

The Wallaces were not always raising grass-fed beef or practicing rotational grazing, though. Like their neighbors, the Wallace farm had been raising grain-fed beef for decades before the family decided to switch to grass in the early 2000s.

Eventually, the family settled on a method that worked for them and their land: A 40-acre pasture is divided into four 10-acre paddocks which are each subdivided into roughly 10-15 moves with movable high tensile electrified fencing on fiberglass posts. That gives the cattle 400-600 moves in a 40-acre field, or three-to-four daily moves. (Wallace estimates he’ll have about 75 head rotating in his pasture on the Keystone farm this summer.) If the cows aren’t keeping up with the growth of the grass, Wallace puts it up in hay.

Almost any pasture can be adapted to rotational grazing, Wallace said. He recommends farmers use what they already have before planning projects. In addition to movable fencing, Wallace had to figure out a way to move resources like water and shade through those hundreds of possible moves. For water, he uses 70-100 gallon water troughs. For shade, he uses a moveable Shade Haven unit.

The Shade Haven is a 1,200 square-foot portable shade structure designed and made in Viroqua, Wis. that can be deployed and closed by a single user in minutes. It is easily moved with a truck, tractor, or ATV. Shade Haven was designed for and by farmers to bring shade to all corners of the pasture to increase cattle productivity.

Wallace said his Shade Haven has been a “very valuable” management tool because his farm had no existing shade. He said he has seen direct benefits in his cattle in milking and calving, and weight gain. The Shade Haven has also helped him manage the pasture since it deters cattle concentration that creates pockets with a high density of urine and manure.

“When it gets hot, (the cattle) stand around the cattle tank and stand there for half a day, week after week, month after month,” Wallace said. “At the end of the season, that spot is toast. You can’t get anything to grow there.

“With the Shade Haven, you can put that in the middle of the pasture and they’ll go there and go to water and go back. It keeps them moving.”

Funding opportunities through the USDA and the NRCS signify a national growth in the popularity of rotational grazing. Whether rotational grazing is done out of concern for conservation or profit, the role of shade in maximizing pasture and herd productivity cannot be overstated. As more farmers and ranches look to implement forms of rotational grazing, portable shade will prove to be an essential management tool on any existing pasture.

Shade tools will be especially important this year as the National Weather Service is predicting above-average summer temperatures extending well into autumn. Access to shade during periods of high heat has been shown to increase cattle weight gain, milk production, and fertility rates.

A study by the University of Kentucky and the University of Arkansas found that milk production can drop by 20-50 percent when dairy cows are exposed to temperatures exceeding 90 degrees. Another study from Texas Tech University discovered shaded heifers had an increase of 17 pounds carcass weight compared to those in an unshaded feedlot.