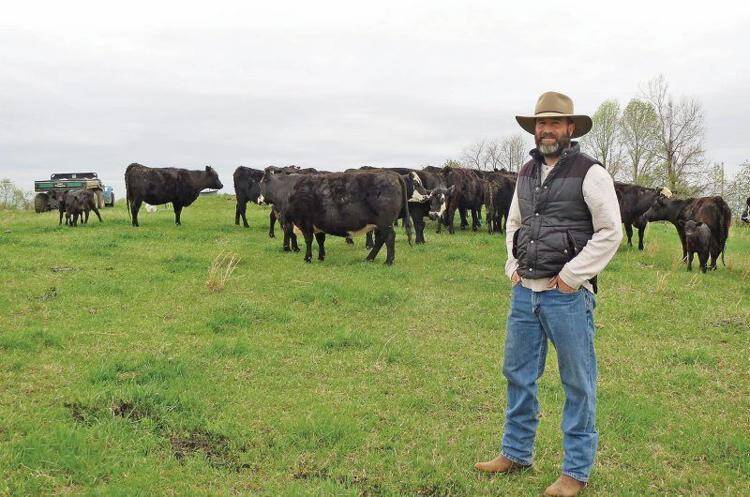 Jason Leavitt is the fourth generation to work his family farm situated between the Chesapeake Bay and the Patuxent River in Owings, Maryland. Leavitt transitioned from mostly grain to grassfed beef, but with no trees in his pasture, he needed shade.

“I tried to construct my own with hay wagons, but once we had a thunderstorm it pretty much got annihilated,” says Leavitt. “I needed a legitimate mobile shade, so I looked around the internet and found Shade Haven.”

That was five years ago. Today this rotational grazier couldn’t be happier. “The Shade Haven pretty much enables us to do what we do,” says Leavitt. “From late May to mid-September, it is not unheard of for temps to be in the 90s, even 100 degrees. We run black Angus, and I, in good conscience, can’t send them out in the fields when it is 100 degrees and let them bake.”

Leavitt moves his 75 Angus daily. “I have to have something I can move from field to field with them. The Shade Haven works awesome. It’s phenomenally easy to use.”

After five years with a Shade Haven, Leavitt wouldn’t want to graze without it. Neither would his cows, who Leavitt says choose to be under the Shade Haven even in paddocks with natural shade.  “I think that is because there is natural convection, there is always somewhat of a breeze or air movement under there.”

The Shade Haven keeps the cows cool, happy and healthy, and it helps Leavitt maintain a healthy pasture. “With the Shade Haven, you have complete control of where the majority of the nutrients are disseminated – especially when it is hot outside,” he adds.

Though he hasn’t kept detailed records on production and conception rates, Leavitt is confident that both have improved since adding mobile shade. Last year was a record year for calves born on his farm. “We had 36 brood cows and 34 calves. That is the first time that has ever happened. Whether that is related to the Shade or the bull, I’m not exactly sure, but something is working out right.”

At the end of the grazing season, Leavitt will clean up his Shade and store it in his barn to prevent damage from snow and ice. He knows that with basic upkeep his SH1200 will be ready for another grazing season. “Just regular maintenance, greasing it, oiling it. I power wash it at the end of each year and put it away correctly in the winter. I’m amazed at the minimal amount of maintenance and attention it needs.”

To find out more about Leavitt’s farm, check out his website, wilsondowellfarms.com.  He sells his grassfed beef, pork and goat products through the website and through Southern Maryland Meats.

Retirement goals often include travel, boats or spending more time on the golf course. John Abe Teague’s retirement dream was to farm and raise cattle, and that’s what he did. In 2014 Teague started with 13 bred Angus cows at his farm in Jonesborough, Tennessee, but with limited trees he was challenged to supply the shade his cattle needed. Then in 2015 he purchased a Shade Haven mobile shade system.

“It has allowed me to do what I do—have cattle and do rotational grazing,” says Teague. “I could not farm without the Shade Haven. It’s that simple.”

For rotational grazing, Teague knew he needed grass, water, fencing and shade. After failed attempts to construct his own shade solution, he found what he needed at Powell Farms, which utilizes nine Shade Havens in its grazing plan. “I was sold the minute I saw it,” says Teague. “I picked the phone up and ordered one.”

Teague moves his cattle and the Shade Haven daily across 15 acres established in five-acre paddocks, which he divides into 8 to 10 smaller paddocks with electric fence on reels. When the cattle at Mire Creek Farm see the Shade Haven, they know it means fresh green grass and a cool place to lie down. “I cluck at them and move the Shade Haven and they follow me,” says Teague. “I tell people, they would follow me all the way to town if I wanted them to. They love the Shade Haven.”

An advocate for rotational grazing, Teague welcomes groups to his farm who want to learn about it. He knows the benefits of managed grazing and mobile shade for animal health, production and profitability. “The bottom line is they get shade when they need it. It gets 95 degrees here in summertime and black-hided cows can’t stand it. They’ve got to have shade,” says Teague, who also appreciates the ability to control where nutrients are going in his pasture. “I find weak spots in the field and place the Shade Haven there, so it gets manure and then I move it. That helps on the fertilizer bill, and it helps on the quality of grass.”

Since a health condition requires him to eat a lot of protein, Teague consumes a portion of his shade-raised, grassfed beef and sells the rest. He’s still fine-tuning his grazing operation and his pastures. “I’ve managed to get one cow for every one acre with rotational grazing,” he adds.

Building his registered Angus cow/calf herd, improving his pastures, and moving the cattle are all part of typical day for Teague, and he wouldn’t want it any other way. “I’m 69. I’ve had a good life. This is my retirement, and the Shade Haven makes it possible.”

Shade Haven is proud to be part of John Abe Teague’s grazing operation. Thanks to John Abe for representing Shade Haven at grazing and beef cattle events around northeast Tennessee.