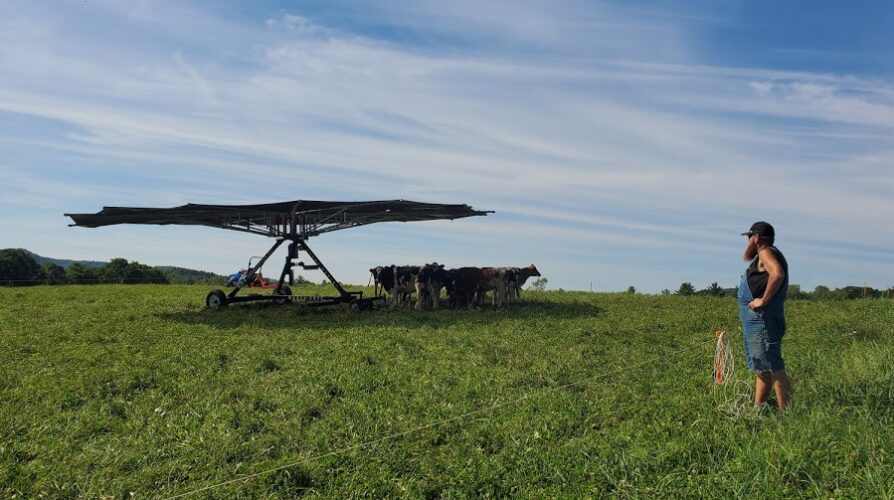 “We intensively moved the cattle to sequester carbon and maintain a healthy pasture and quality feed for our animals,” says grazing project lead Zach Biermann.

Biermann, who has worked at Organic Valley since 1996, said mobile shade was a critical component of the project to prevent heat stress and keep the cattle comfortable, since animal welfare is at the heart of good grazing practices.

“We brought in the Shade Haven, because we are trying to be the best at pasture in the world,” says Biermann. “Avoiding heat stress is required to meet our animal care standards, Shade Haven allows us to do that in an intensive rotational grazing setup.”

The cattle were moved daily along with the SH1200 that was equipped with an attached mineral bucket and fly control system. Biermann was impressed that the black shade canopy on the Shade Haven created a breeze for the cattle below even on a still, 90 degree day. It’s no surprise the heifers congregated under the Shade Haven wherever it was on the pasture.

“The benefit of that was nutrient management,” notes Biermann. “I was able to place the Shade Haven where we needed the nutrients the most. As this project traveled around in a clockwise circular motion, we were able to move the nutrients around and evenly distribute those nutrients on the pasture.”

Comfortable cattle gain weight, and Biermann was pleased with the gains at the end of the grazing season.

“Fifteen heifers came into the pasture program at 550 pounds average and left at about 700 pounds average.  So they had 150 pound gain in 94 days of using the Shade Haven.”

Biermann also expects to see improvement in soil as a result of the grazing project and mobile shade, though it is too early to know those results.

Certain to be part of further grazing and soil building research, Shade Haven is proud to help Organic Valley meet its goal of being the best at pasture. 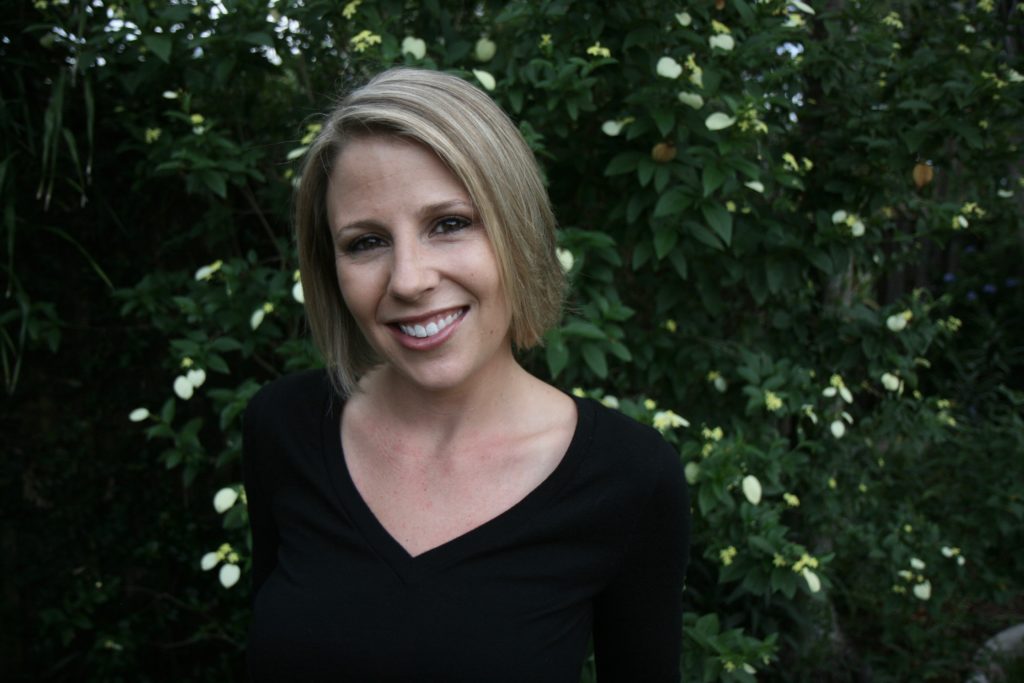 In her newly released book, “One Size Fits None: A Farm Girl’s Search for the Promise of Regenerative Agriculture,” Stephanie Anderson answers the question, “What might a better version of agriculture look like?”

We’re happy Anderson took time away from her book signings and classroom at Florida Atlantic University to share some insight on regenerative agriculture.

Q: What needs to happen for farmers to start thinking differently about how they farm?
A: It starts with being honest with yourself and open to taking a new direction. Change is difficult no matter what you’re talking about. But any good farmer who cares about the land has to know that agrochemicals are not right—the soil looks different, things are changing, pastures don’t look the same. It is hard to admit that you are on a course that isn’t the best. I think about my Dad [a conventional farmer]. He is such a kind and wonderful man. For many years he was very stubborn about it, but now he is starting to be more open after he read the book and his neighbors are starting to talk about it. My brother as well. It takes thinking and self-reflection.

Q: So you think people are starting to change?
A: I think so. Things like cover crops are way more mainstream than it used to be. Rotational grazing is coming back instead of this conventional grazing model. We are also seeing some positive changes on a bigger level. General Mills, for example, just bought a bunch of land in South Dakota not far from my family’s ranch. Many thousands of acres that they will turn all regenerative. Something like that could make a huge difference.

Q: What is grazing’s role in regenerative agriculture?
A: Grazing plays a huge role. One of the number one issues on our grassland right now is desertification. Grasslands are becoming deserts, nothing is growing. The soil is not able to hold water properly under the conventional model, because the native grasses start to recede, woody plants come in, and that reduces the carbon content of the soil over time, which contributes to further degradation of the grassland. Our prairies historically were home to the bison and that was a huge part of the prairie life cycle – having this really high-impact time on a piece of land and then a long period of rest. So the more people can replicate that in those areas, the more we will be able to restore all of that grassland. It is just so key to capturing carbon and trying to slow climate change – trapping and storing carbon underground rather than releasing it. I think grazing is very important on the grassland and as more farmers incorporate grazing on their fields. That is another huge potential that is open to farmers. Bring livestock back to the farm in a way we haven’t seen for many years.

Q: Can you comment on how important it is to have tools like the Shade Haven available?
A: We live in a technological age. We have to embrace the tools that make sense, that contribute to further and true sustainability and reject those that don’t. Products like Shade Haven, portable electric fencing, and well systems that run on solar are all awesome tools that can help make the process easier. Just practically in areas like the high plains, there just isn’t a lot of shade. People need that for the health of their animals. Unfortunately, we live in an era of increasing temperatures with global warming and climate change. I think tools like Shade Haven will be more important than ever to keep livestock safe and mitigate risk.

Q: Rotational grazing and regenerative agriculture can be profitable – as is proven by Gabe Brown, the example you write about in your book. How do you convince conventional farmers that they can be profitable with regenerative ag?
A: It can be an uphill battle, because for so many decades they have been sold on the idea that high-intensity industrial farming, specialization, further mechanization will lead to greater profits. We know that hasn’t happened for farmers. We know that farm consolidation is a huge problem. We know more farmers are going out of business than going into business. But still a lot of people think, ‘how can I be profitable without my pesticides, without my Ivermec or without my growth hormones?’I think it comes from sharing stories. That is one of the most powerful things. Farmers and ranchers that I know don’t like to be talked down to, especially from policy experts, people who act like they may know better. They prefer neighbors telling stories. That is one of the reasons I wrote the book, too. To give people access to some of those stories. I think seeing evidence of that can help convince them that it can be profitable. Also, asking farmers to be realistic about their finances. I know a lot of farmers rely on a lot of government programs. As Gabe asks – once you take those out, are you making money? And if not, how can you insure your bottom line if those programs go away? That appeals to their financial common sense, that practicality that most farmers have can hopefully convince them and be a powerful message.

Q: How do you respond to the argument that you can’t feed the world without large scale agriculture? A: I hate it when people say that, because it gets to people’s fears. Of course, people have reason to be scared of such a thing, but it is a message that big ag used to justify the scaling up… I think we have to look at what we are producing per acre. We know that regenerative grazing, this high-intensity, short-duration grazing allows for so many more animals, such a higher stocking rate per acre. You can stock your pastures at such a higher rate. It’s the same with your cropland. You can grow multiple crops and also produce forage for your livestock. So there is multiple levels. Michael Polin mainstreamed the term stacking – seeing the farm as a layered enterprise. That will allow us to feed the world, no problem.

Q: Do you feel optimistic about the future of farming after researching and writing the book?
A: I do. I believe in my heart that farmers and ranchers are such good people. I know that from living in a rural community for 18 years and then working as an ag reporter and still having such close ties to rural communities and rural people. I still identify myself as rural even though I live in a city now. I do think good people will take the right steps. I see it in younger farmers like my brother. He is 27 and he is working at changing the acres that my Dad has allowed him to manage, and other farmers are doing the same. It is so exciting to see that. I see more universities offering programs to help educate people about regenerative practices. That is a good sign as well. 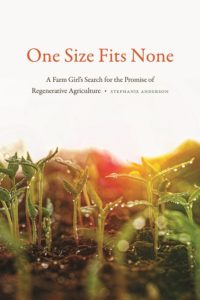 “One Size Fits None” is a must-read for anyone who cares about agriculture. Ask it at your local bookstore. Also available on Anderson’s website and on Amazon.