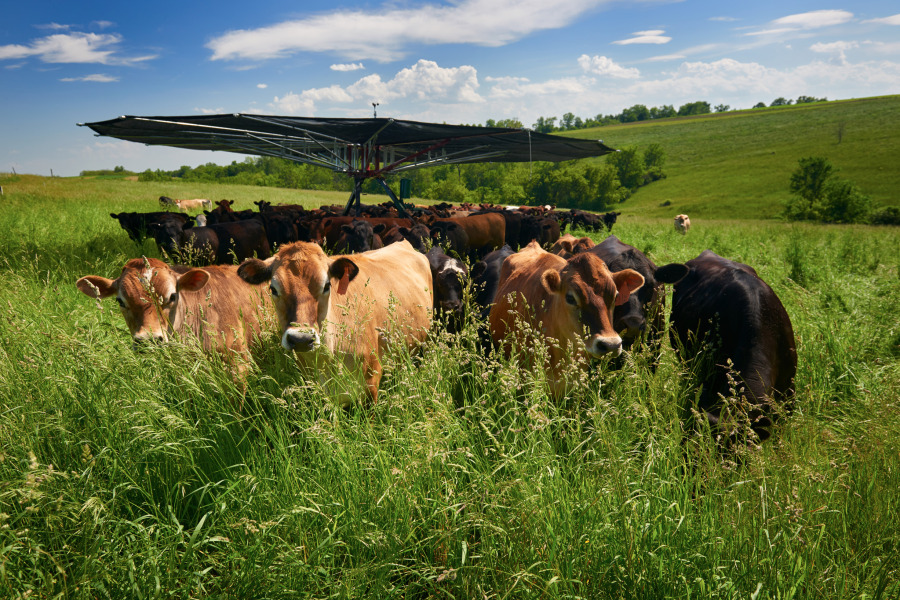 Keeping cattle cool in the summer months can be a challenge. Especially with the record heat and humidity the Mid-Atlantic region has seen this month. For Calvert County farmer Jason Leavitt, a portable shade structure has been a huge help.

“For me, not providing shade isn’t really an option,” said Leavitt, owner of Wilson Dowell Farm in Owings, Md. “They can survive without shade, but in my opinion, this isn’t a survivability contest.”

Leavitt keeps the cattle on pasture year round. When his grandfather was raising cattle, they had access to streams and shade in the wooded areas. Now, as part of best management practices, Leavitt’s 300-acre farm is surrounded by extensive fencing systems. While the fences help to improve water quality and soil erosion, they also limit the cattle’s access to natural shade.

Edward Draper, the Wye Angus program manager at the University of Maryland’s Wye Research and Education Center said that in a grazing system, providing adequate shade and fresh water are key. Without it, the effects are diminished production.

“The more time they spend out on pasture, the better. If they’re in the shade instead of grazing, they’re not eating. This means they’re not producing as much milk which can prevent calves from growing,” Draper said.

Leavitt said he considered planting trees in the pasture, but they are slow to establish. He said he made attempts to create his own shade structures. They were either stationary, which destroyed the grass and concentrated nutrients in one spot, or they were too cumbersome to move. Ultimately, Leavitt found Shade Haven, a company out of Wisconsin that specializes in portable shade units. The initial investment was high, Leavitt said. The structure he bought cost about $18,000. He estimates it will pay for itself in four years, though.

“If I didn’t have it, I couldn’t do what we’re doing now,” Leavitt said.

In a rotational grazing system, Leavitt said he needs 25 to 50-percent more pasture, depending on the forage type, in the summer compared to the spring and fall. The shade structure reduces his need to feed hay because he can fully utilize his pastures. He said he’s saved about $5,000 in hay that he would have had to purchase this summer without the portable shade.

“We’re still feeding some hay, but not nearly as much. I’d rather have them eating live green plants all the time,” Leavitt said.

The structure looks like a helicopter with a round canopy that is just over 38 feet in diameter. It’s covered in 80-percent shade cloth that provides 1,200 square feet of shade at high noon.
Leavitt said the tiny holes in the cloth create convection, which generates airflow.

“It’s tends to be cooler under the shade structure than in natural shade. The cattle actually prefer it,” Leavitt said.

Draper said at the Wye they are fortunate to be able to provide shade with trees. For some producers, though, mobile shade can be effective.

“It would be important to move it every day or so, so that the cattle don’t make a mess in one spot,” Draper said.

Pasture quality is important to Leavitt’s operation. The continuous grazing is made easier with the portable shade structure. He said have multiple forage species is also critical.

“In the spring, grass could come back and be grazable in two weeks. This time of year, it could be a month. That’s why it’s important to not have a monoculture of forage species,” Leavitt explained.

His pastures are a mix of millet and fescue. This year, he also planted five acres of Sudan grass which has thrived in the heat and humidity. Leavitt went through the Maryland Grazer’s Network mentorship program last year and hopes to do more with annuals and seasonal grasses. Overall, Leavitt said he was pleased with his investment. He’s seen real value in improved efficiency, but said the intangible benefits are equally as important to him.

“If it ends up being more expensive or less efficient, I can live with that. I feel that it is the right thing to do,” Leavitt said.